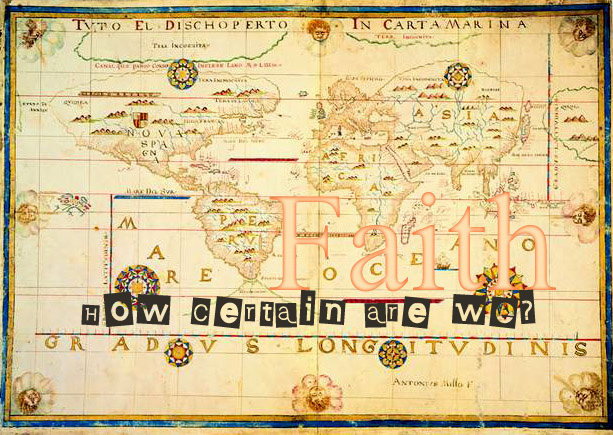 Faith is not mental assent to irrefutable facts

The classic, oft-quoted, and definitive verse on faith in the New Testament is Hebrews 11:1. And I love the Recovery Version’s translation here (following Darby’s precedent):

Faith is understood not as the substance itself but the substantiating ability that makes the divine reality real and experiential. Just like the eyes substantiate color, faith substantiates things hoped for. The organ (eye) itself is not the object (color) but the means to personally and concretely experience the object. This is why faith is related mainly to your spirit and not your mind. Paul calls it a “spirit of faith (2 Cor. 4:13).” The mind can at best process and interpret information. The human spirit can subjectively experience the reality that’s behind it.

Purely “historical faith” then is not saving faith. The results of scholarship are not truths of salvation merely because they are historically true.

In other words, I don’t believe ‘in’ research. I am not saved by scholarship. I believe ‘into’ a Person.

Thus, I don’t believe in Jesus the same way I believe in Alexander the Great or in valence electrons. The New Testament equates believing with receiving. John 1:12 says, “But as many as received Him, to them He gave the authority to become children of God, to those who believe into His name.” People may be subdued by the best arguments but still not believe or receive Christ. Paul was aware of this in Corinth.

And my speech and my proclamation were not in persuasive words of wisdom but in demonstration of the Spirit and of power, in order that your faith would not stand in the wisdom of men but in the power of God.

The secular historians (Pliny the Younger, Tacitus, Suetonius, Josephus) can only bring us so close to the historical Jesus. Only a faint outline emerges. Still, enough is established to quell critical skepticism.

Even the inspired evangelists do not write an actual biography. They are not disinterested reports meant for the annals of Jerusalem. They are not trying to reprint all the information that would appear on a driver’s license or birth certificate. The genre is non-science, not anti-science.

They capture genuine history but transcend it, simultaneously.

But you did not so learn Christ, if indeed you have heard Him and have been taught in Him as the reality is in Jesus.

Hans Küng rounds off his chapter on The Real Christ with a very Proustian analogy:

The truth lies between shallow credulity which is closely related to superstition and radical skepticism which is frequently linked with an uncritical belief in hypotheses… What are more important than the historically proved authenticity of a particular saying are the ruling tendencies, the peculiar forms of behavior, the typical basic trends, the clearly dominating factors, what is not pressed into schemes and patterns but the “open” total picture. And in this respect we are not without an answer. That is to say, an answer is possible if we avoid the danger of not seeing the wood for the trees, the consensus for the diversities of opinion- a danger to which scholars preoccupied with exegetical details are sometimes exposed.

These discussions of exegetical details are about as important or unimportant as the question whether Bach’s Brandenburg Concertos were originally written for the Margrave of Brandenburg (they were not) or whether the Second in F Major should be played with the trumpet or the horn (and which), and so on. Certainly these are important differences, at least for the musical scholar. But there is no doubt about the name of the work and everyone knows the melody, whether it is played with trumpet or horn. And, although there may be some doubt about the details of the score, there can be none at all about the existence of the work and about the score as a whole. In fact, we can hear and enjoy the Brandenburg No. 2, even without knowing the problems of the history of music, although a little knowledge helps us to get more out of listening to it. Need we take any further the comparison with the Gospels and their theme?

7 thoughts on “A Historical, Certain Whole”