Trials of a Translator 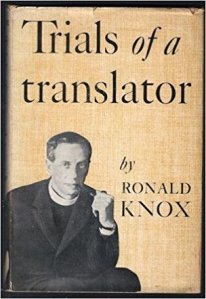 is a delightful little book on “the difficulties which beset the path of the conscientious translator” (113). It is Ronald Knox’s witty and sophisticated little apologia on his translation of the Bible from the Vulgate. The book is a collection of 7 short essays that Knox wrote during the nine years he was translating in the 1940s. It is written with the humorous calm of a beleaguered translator surrounded by his critics, by the man who in the onslaught of attack doesn’t mind using his last minutes to self-consciously pontificate on his method and explain some of his decisions, just for the record.

Knox was commissioned to provide a fresh translation of the Vulgate for Catholic use that would supersede the Challoner revision of the Douay-Rheims. This version was 200 years old at Knox’s time and was filled with obsolete language and Latinate accretions. Above all, Knox wanted to produce a version that could be read for more than ten minutes without boredom or bewilderment (4). He lamented the dusty, unintelligible archaisms and asked, “What reason have we to suppose that the Scriptures can only be edifying if they are approached by way of the British Museum?” (35). But he also wondered about the public reaction to change:

“In translating a sacred text, of which many older versions have become familiar, you are naturally pulled up now and again by the consideration, ‘Will the public stand a rendering so different from the rendering it is accustomed to?'” (101)

Knox’s goal was to produce a timeless, literary translation in English idiom designed for general reading. He had far-sighted aspirations—he hoped the Englishman of 2150 would not find it hopelessly dated (90). Knox was convinced that the thing could be done and should be done, despite his misgivings about the success of his own efforts.

Uncertain of his work but sure of his principles, he decided to publish this collection of essays. Knox passes this collection on to us like a map to an ancient temple lost in the jungle that he has failed to reach. The expeditions of the past should be held in regard, but, for future explorers, the map should be valued even more.

I am inclined to think that a book of this sort has more permanent value than any translation I have done, or could do. (ix)

What kind of map does Knox give us? Knox is solidly in the dynamic equivalence translation camp. Doubly so. I say doubly because not only does he firmly believe in this translation theory in general, he is translating Jerome’s Latin Vulgate, which is already a dynamic translation.

Jerome made no effort to hide his translation method:

Terence has translated Menander: Plautus and Caecilius the old comic poets. Do they ever stick at words? Do they not rather in their versions think first of preserving the beauty and charm of their originals? What men like you call fidelity in transcription, the learned term pestilent minuteness….If I render word for word, the result will sound uncouth….From my youth up I at least have always aimed at rendering sense not words.[1]

It’s clear that Jerome prioritizes sense and style over lexical equivalence. Knox does the same, following Jerome like a tango partner—closely, but with his own artistic flourishes. He says, “the first thing demanded of a new translation is that it should break away from the literal translation of sentences” (6).

Some of Knox’s principles are:

What we end up with is a literary translation, probably best for general reading as a supplement to a more literal translation. It’s possible to appreciate a work, even greatly benefit from it, yet maintain a critical distance from it, without swallowing it hook, line, and sinker. As Knox himself said, “Often [one] will disagree, but his own ideas will be clarified, none the less, by the effort of disagreement” (x). While I don’t agree with every point of his translation approach, I thoroughly enjoyed reading this account of his translation work. If you want to peruse his translation for yourself, it is online here.

Here are 20 quotes from Trials of a Translator. Enjoy!

I have long since given up protesting when controversialists misquote me, or newspaper columnists credit me with the authorship of Limericks that are none of mine. But if you question a rendering of mine in the New Testament, you come up against a parental instinct hardly less ferocious than that of the mother-bear. (viii)

It is doubtful whether we shall ever again allow ourselves to fall under the spell of a single, uniform text, consecrated by its antiquity. And as each new adventurer sets out on his quest for that North West Passage, the perfect rendering of Holy Writ, he will do well to take note of buoys that mark the channel. (x)

The great principle he there lays down is that the business of a translator is not to ask, ‘How shall I make this foreigner talk English?’ but ‘What would an Englishman have said to express this?’ (4-5)

It is a grave error to stick to a form of words, in itself unnatural English, merely because a thousand repetitions have familiarized the public ear with the sound of it. Just because we are familiar with a form of words, we fail to be struck by its full meaning. (10)

Words are not coins, dead things whose value can be mathematically computed….Words are living things, full of shades of meaning, full of associations; and, what is more, they are apt to change their significance from one generation to the next. The translator who understands his job feels, constantly, like Alice in Wonderland trying to play croquet with flamingoes for mallets and hedgehogs for balls; words are for ever eluding his grasp. (13)

Must I translate the Bible in the idiom of James Joyce, or of Louis MacNeice?….Catering for the mood of to-day will mean, almost certainly, ministering to the nausea of to-morrow. (18)

The new wine of the gospel, you felt, was kept in strangely cobwebby bottles. (22)

As the traveller, lost in some impenetrable jungle, and convinced that he will never make his way out of it alive, sits down to blaze on a tree-trunk the record of his wanderings, for the benefit of some luckier explorer in times to come; so the translator, seeing the end before him of a task which can never be complete, is fain to draw breath, to look round him, and to meditate on the reflex principles which have guided him thus far. (24)

Your examination of conscience, when you are doing any translating work, is obviously grouped under three heads: Is it accurate? Is it intelligible? Is it readable? (25)

Always you are conscious of trying to open a door with a key that doesn’t quite fit. (26)

That the prophets, translate them how you will, can be easy reading, I neither believe nor pretend. (33)

You may translate the Bible, as you might translate a French book on atomic physics, for the sake of the student. Please God, there will always be earnest people, perhaps one in a thousand, who will study the Scriptures; but the reader and the student are different people. Where are the readers of the Bible? (34)

Any translation is a good one in proportion as you can forget, while reading it, that it is a translation at all. (36)

The student in his library is accustomed to deal with bulky volumes. But if you hope that your translation will be handled on buses and in bed, you do not want to saddle the reader with extra weight. (39)

It is not till you sit down to translate the Bible that words begin to haunt you with the sense of their evasiveness, and their caducity. (85)

The man who sits down to translate the Bible slips, as a rule, into the idiom of his grandfathers. He thinks his own contemporaries will be rather impressed at language two centuries out of date; he forgets that his own version, if it is accepted, will last two hundred years longer; by which time the die-hards will all be protesting against the blasphemy of altering a word of it, while the general public will be wondering what on earth it is all about. (89-90)

When you say you are going to translate the Bible, it is assumed that you do not mean to do anything of the kind. It is assumed that you mean to revise the existing translation, with parts of which we are all familiar; altering a word here and a word there, like a compositor correcting proofs with a pair of tweezers. (106-107)

2 thoughts on “20 Quotes from Trials of a Translator”