Everywhere I have searched for peace and nowhere found it, except in a corner with a book. –Thomas à Kempis

Though not on such a melodramatic quest, I was, this year, in a corner with 19 books. Here are my top five.

Throughout high school my favorite author was Fitzgerald. Sometime during college I graduated to Proust. The jump can be compared to going from Chopin to Liszt. I came upon him by chance in a used book store, started flipping, and was hooked. I had no idea who he was and even began reading In Search of Lost Time with volume 5 of 7. It didn’t matter, it was his writing I loved, not his plot (what plot?). Ever since, it has held the coveted title “Favorite Book”. Things got complicated this year when I read Brothers Karamazov. I had to restructure operations to accommodate a sort of demerger that left me with “Favorite Author” AND “Favorite Book”, with Proust taking the former and Brothers Karamazov the latter. That alone makes 2015 a significant year of reading for me. 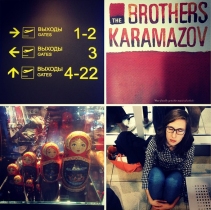 I began the book last winter on a layover in Moscow, nestled between babushka dolls and a sleepy travel companion. I thought it would make a good winter book and it was a whole lot shorter than my other option, Le Mis. Two friends happened also to be reading it and I wondered, when else in life will I have two friends reading Brothers Karamazov? It was the right time to strike. Plus, I knew I could always tell people later, with a dash of pride and a pinch of misleading, “Brothers Karamazov? Yeah, I read that back when I was in Russia.”

Brothers Karamazov is powerful and passionate. The theme is dramatic and grand. The characters are real and reflective—I saw parts of myself in all three brothers. Proust once said, “Every reader, as he reads, is actually the reader of himself. The writer’s work is only a kind of optical instrument he provides the reader so he can discern what he might never have seen in himself without this book. The reader’s recognition in himself of what the book says is the proof of the book’s truth.”[1] The unrestrained passion of Dmitri, the cold rationality of Ivan, the spiritual purity of Alexei, even the wicked buffoonery of Fyodor Pavlovich—I kept wondering who I identified with most. Honestly, in the end, probably Dmitri.

Dostoevsky depicts total depravity, moral responsibility, the reality of God, the tension of faith and doubt, the cry for redemption, and unselfish love of mankind in a narrative realism that would make Courbet envious. Dialogue in Dostoevsky’s hand is a powerful tool. I was brought to tears four times.

My favorite scenes included: Alexei and Ivan’s conversation in the tavern (including the Grand Inquisitor), the story of the mysterious visitor in the Life of Elder Zosima, Grushenka’s story of only giving an onion, Dimitri’s regret and desire for a new start in his delirium, the atheist who has to walk a quadrillion kilometers to be admitted into paradise and says after 2 seconds of arriving that it was worth it, and, of course, the whole trial is simply amazing; I kept believing both sides.

Five things came together to make me want to read Dante’s Comedy (divine, only since 1555):

1. I was reading a book published in 1875 on the tripartite nature of man and was upset that I couldn’t nod my head in affirmation when I came across this line,

When a Christian poet, such as Dante or Milton, has to describe the underworld and its inhabitants, he has only the tongues of men with which to describe the operations of angels… Milton’s underworld is less fabulous than that of Dante, but it is not near so vivid. What Milton imagined, Dante imaged forth,—the first was a cartoon, but the other a statue hewed from the living stone.[2]

2. I saw a copy of Mandelbaum’s translation on a friend’s shelf who had studied literature in college. I took it down and read through half of the first canto. I was lured.

3. Reading up on Dante after our first encounter, I came across this line by T. S. Eliot,

4. I met a burly football player at UMHB who made a comment, in passing, about having read the Inferno in high school. I was jealous.

The next problem was picking a translation. After a very scientific process, I decided to go with Anthony Esolen (David Bentley Hart, whose writing I really like, helped me take the plunge by calling it, again, in passing, one of “the very best recent renderings of the poem“). As soon as I began, I knew I was going to love it. And i did.

If you decide to climb Everest don’t stop after tromping around base camp; make the ascent. Too many readers stop reading Dante after the Inferno; to do this is to miss everything. Dante’s poem is not a tragedy that ends in hell. It’s a love poem. Love—disordered, perfected, consummated—is the central theme of Dante’s Comedy (the central canto of the whole poem is on love). It’s also a COMEDY. That doesn’t mean that it’s funny. It means that it goes from bad to good. Dante’s whole point is that the meaning of human life is to enjoy God, to behold Him in love and become Him in life (deification is mentioned in Paradise 1.70). Dante got lost in that dark and dense wood in the beginning because he, like we so often do, lost sight of this. Reading Dante, for all its classical references, philosophical flourishes, Catholic excesses, and political plots can remind us what our ultimate destination is—the Triune God Himself.

I’ve fallen behind a bit in working my way through Witness Lee’s Life-Study of the Bible series. I was spinning my wheels trying to get into Exodus and eventually decided to just do something else. For some reason, the Gospel of Mark was really calling my name. Despite the Gospel’s simplicity (Lee himself admits to considering it a “cup of plain water” up until being forced to get into it seriously), Lee’s treatment of Mark is profound, but requires a full reading to appreciate it for what it is. The overall view presented builds gradually and eventually circles back on itself in new ways in later chapters (conspicuously starting at ch 52, but earlier too). It’s not until you get a few chapters under your belt that you begin to really get what Lee is trying to convey. And that is, a vision of the meaning of Mark as a whole in relation to the Bible as a whole understood from the vantage point of God’s economy. It’s a very spiritual-experiential, Christocentric approach, although one not negating the literal sense of the text in any way.

The broad theme Lee introduces and pursues in Mark is that Jesus Christ is the Slave-Savior come to serve sinners. The gospel is His service to sinners, a service that results in His reproduction, enlargement, and continuation in a corporate new man. He comes to heal sinners and raise them up through His death and resurrection so that they can serve Him. The result of His service is the reproduction, enlargement, and continuation of Christ in a corporate new man.

It’s an inspiring vision and all throughout it is radically Christocentric in revelation and experience. More than any other commentary on Mark (I checked out the best 10 commentaries at the same time, and fully read M. Eugene Boring’s commentary concurrently), this one has helped me to know Christ more, love Christ more, experience His gospel-service more, and see more what God’s economy is in the Bible. Read my full review for more.

There can be no better preparation for reading The Name of the Rose than reading the Divine Comedy. Dante completed writing his Comedy in 1320 (it’s set in 1300); Umberto Eco sets his story in 1327. The Divine Comedy is the best introduction, not merely because of the proximity of their dates, but because Dante plunges you into a world. By leading us through the world to come, Dante establishes for us the world that was—the political, philosophical, and theological world, and worldview, of the Middle Ages. Eco says, “Writing a novel is a cosmological matter… to tell a story you must first of all construct a world, furnished as much as possible, down to the slightest detail.”[4] Eco does indeed construct, but Dante opens the door. Dante will make you feel more at home in the world Eco constructs. Otherwise, you may feel like you are at someone else’s family reunion, where names, traditions, and shared memories elude you.

On the level of plot, The Name of the Rose is a murder mystery involving monks in an Italian abbey in 1327.  But the author is a professor of semiotics, so things are obviously not so simple. The abbey houses a renowned library, which turns out to be an off-limits labyrinth. The murders follow the pattern of the 7 trumpets of the Apocalypse. A Franciscan monk, with nominalist leanings, turns detective. Another monk opposes intellectual pride and the lust for novelty. An French inquisitor arrives for a theological debate on the poverty of Jesus. The spiritual nature of the church is pitted against the secular jurisdiction of the empire. The curiosity of reason is pitted against the certainty of dogma.  The passion for knowledge is pitted against the impassibility of faith. The logic of modernism is pitted against the ambiguity of postmodernism. A hidden book on laughter is driving it all.

Dizzying heights, I know. But the book is great, even if you don’t fully understand it. The beginning is straight up genius and hilarious. I wish I had written a book and thought to start it that way. And at the very end, Eco does the unexpected and undermines the imposing logical aedificium he’s built up. It’s a spectacular, pyrotechnic ending that leaves you, among the ashes, wondering what it all means. 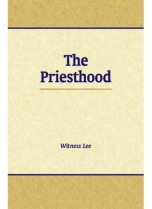 The Priesthood by Witness Lee is an inspiring presentation of the centrality of the priesthood to the fulfillment of God’s purpose. The concept of the universal priesthood of all believers has been central to the Reformation ever since Martin Luther spoke about it in 1520. In Luther’s teaching this involves much more than the generic understanding today of a believer’s direct access to God in Christ without a human mediator. For Luther the priesthood is related to public function. In his book, Concerning the Ministry, Luther lists seven common rights believers have as part of the universal priesthood. However, in practice the universal priesthood was severely limited by Luther’s views that, to avoid confusion, only one person officially called (ordained) through the community would function in these roles. Hence the pastoral system.

Today, there is near universal paucity in practice and poverty in understanding of the priesthood of all believers, beyond merely having direct access to God in Christ. This is where Lee’s book comes in handy.