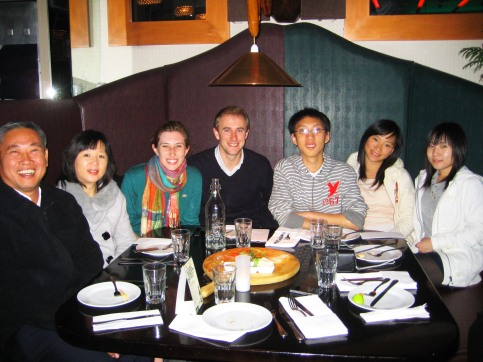 The world has lost its bearings. Not that ideologies are lacking, to give directions: only that they lead nowhere. People are going round in circles in the cage of their planet, because they have forgotten that they can look up to the sky… Because all we want is to live, it has become impossible for us to live. Just look around you!

-Eugene Ionesco, founder of the theater of the absurd, 1972

In it he suggests importing the Christian love (agape) feast into secular society to remedy the threatened and waning sense of community apparent in postmodern life.

This raises two questions: How did religion once enhance the spirit of community? More practically, can secular society ever recover that spirit without returning to the theological principles that were entwined with it? I, for one, believe that it is possible to reclaim our sense of community—and that we can do so, moreover, without having to build upon a religious foundation.

But IS it possible to untwine the theological principles from a true spirit of community?

Is it possible to dissect the community of faith, remove the theological principles, and then expect the pulse to remain? Is not this community the expression of an inner, animating reality?

The condition of the gatherings of the community of believers does not merely derive from a common belief, interest, or cause but from their nature. The church is the household of the faith (Gal 6:10). God has called us into the fellowship of His Son (1 Cor 1:9). This fellowship can not be borrowed or reproduced, not even with express permission.

As David Ho rightly points out, there is no lack of community today in the world. But in a sense these are pseudo-communities, pointers to the true community which all men seek, the church, where community and reality converge.

Besides, haven’t more ambitious ideas been postulated and carried out, ideas which either marginalized or outright suppressed the religious needs of men, that collapsed in utter failure?

What is needed is not new systems or suggestions, but an intrinsic change in man himself. Hence, two near ubiquitous Greek words in the New Testament- zoe and agape.

These two words provide an entirely new horizon to humanity. But they derive from God alone.

An agape feast is a mutual sharing, relishing, and consuming of the life of God expressed as the love of God. It’s not simple camaraderie or moving past our differences. And it’s certainly not agreeing to disagree. You just can’t replicate this without God.

Without God, atheism leads to nihilism. This isn’t to say that atheists are categorically unmoral, but that they have no ultimate support, reason, value, or meaning to the reality they are experiencing. To true atheism, reality itself, not just community, is threatened.

Most atheists are simply living off the “leftovers” from the West’s theistic cultural tradition and that if an atheist decided to live solely for himself or herself at the expense of others there is nothing in his or her worldview that would forbid or even discourage it.

All this is true of course only if atheism is quite serious and not an intellectual pose, snobbish caprice or thoughtless superficiality.

An agape restaurant without God is a farce and an impossibility.

The Christian experience that is exemplified in love feasts transcends social experience. It is of another class. I’m reminded of what someone once said, “The Bible is not one book of many on a shelf. It is deserving of its own shelf.”

Without the reality within, any attempt at replicating this peculiar (Exo. 19:5, KJV) community will be ineffectual.

It’s like dogs discussing amongst themselves how to incorporate flight into their community based on spotting a bird in the sky. It may sound convincing and elicit hearty yapping but it just won’t work.

They need a different life.

Even if the dogs could manage to fly, they are still dogs. God doesn’t ask dogs to fly. He asks dogs to become birds.

12 thoughts on “Religion for Atheists?”